Contact us
Blog
NOT AFFECTED AFFECTED
×
was not affected.
was affected.
January 23rd, 2019

Not an outage, but the shutdown

On the week starting January 13 news on Zimbabwe’ internet connection shutdown had been flooding over media. We are here not to discuss the roots of this situation but, instead, to look at the BGP and connectivity picture we have from Zimbabwe.

When we released the 2018 ”Reliability of National Internet Segments” report lots of readers asked us how the results we calculate correlate to intentional internet shutdown in any given region. Our model helps us to understand the most prominent traffic owner in any region better, thus allowing us to count the percentage of services affected with the shutdown of such a big player, usually the largest ISP in a country.

However, we stated for several times, that in a situation when some regulator could force such largest ISP to filter something, that could be enough for smaller actors to follow. In the case of Zimbabwe, several ISPs operating in the country were told to block all major social media as well as messenger platforms. We are not sure this picture represents a 100% accurate data because we have limited visibility in Zimbabwe. If you are an internet service provider, wishing to get BGP analytics data - we urge you to establish a session after registering with the Radar and provide a full view. Also, we would like to notice, that just establishing a session without sending complete information about all the seen routes doesn’t help us make monitoring better for you. In this particular case, a fully operational session from the region could have allowed us to provide all the correct details of what was happening.

Recently with the CenturyLink outage, we saw how a significant operator shutdown could affect thousands of people, services, including those emergency ones, spreading panic. The internet in the U.S. survived such a fail of one of the biggest ISPs.

That is precisely what we explore with the reliability research. In 2018 we stated that CenturyLink became the biggest ISP within the United States market, improving overall region stability by 3 positions up to the 7th place of the IPv4 rating. Though users experienced significant service downgrade, CenturyLink didn’t fall entirely. 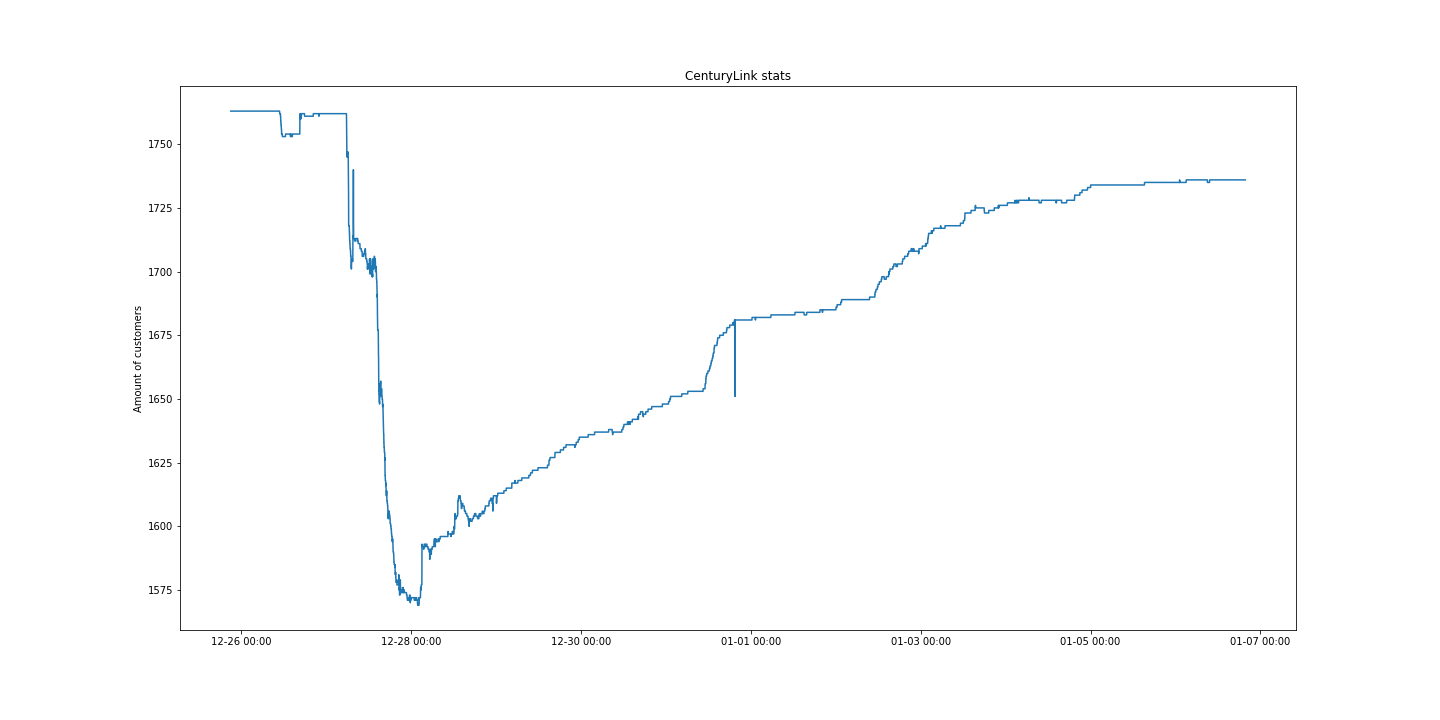 CenturyLink outage timeline, showing that a 100% downtime was never reached

However, U.S. represents a highly diversified and broad market with dozens of whale ISPs and hundreds of smaller fishes. In Zimbabwe, there are few significant ISPs, all of which got the letter from the government representative. On Monday, January 21 Zimbabwe High Court ruled to restore the internet access in full and the biggest operator, Econet Wireless, sent a message confirming that to customers.

We do not know yet how the Zimbabwe internet landscape would further evolve, intentional federal shutdowns are something we want to more in-depth look into in the 2018 Stability Report in a separate chapter, because, once again as this is important, we have never researched the force shutdown options and consequences on a global scale. Some people misunderstand the stability in a certain way: they suppose, that if a country’s overall stability rating is good or above average, the whole internet connection could not be shut down, offlining all the users. Which, as you understand now, is not entirely accurate and to further stress the difference, we want to show you the Zimbabwe stability metrics from 2018.

A natural fail of this AS wouldn’t affect more than 30% of the ASes within the country. Vice versa, if you have 3 ISPs controlling equal or close to the fair share of the market, it is not that hard to manage all the traffic with their help, which is what happened last week in Zimbabwe.

So the stability rating doesn’t correlate with the government’ or regulator’s ability to control and force. An additional important thing to note here is that if the country’s traffic is represented at foreign (exterritorial) Internet Exchanges and there are foreign players on the market, even small traffic percentage would make it harder to quickly and intentionally block resources with high impact probability. Zimbabwe had all those parameters in place, adjusted in a certain way to make restrictions smoother to apply.

We would like to ask the reader and the community on the necessity of such data and analytics in our future stability reports, if we should include these monitoring metrics into consideration.